Obsessively binge watching Jane the Virgin coincided with – and perhaps influenced – my decision to stop dating and stop having sex. Not dating when you are romantically-lonely is uncomfortable and dissonant. It means recognising that while some aspects of dating are out of my control (namely: the other person and everything they feel, do, or say), I am able to at least choose what I do or say, if not how I feel. 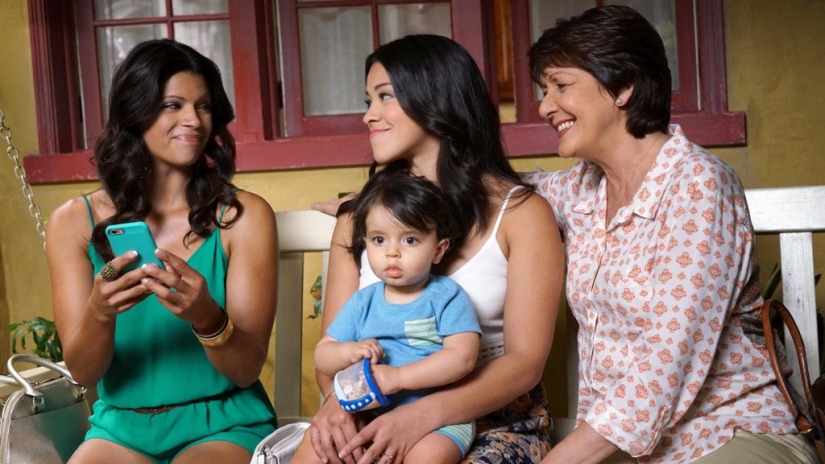 I love this picture because they’re all single mothers with wildly different but beautiful and relatable experiences of parenthood.

The titular heroine of Jane the Virgin vowed to remain a virgin until marriage, because of her Catholic beliefs (and Catholic grandmother). I’m not religious so celibacy hadn’t crossed my mind as a possible choice for me: a feminist, divorced, atheist single mother.

Jane doesn’t ‘put out’ but men fall in love with her anyway. What?  Men have feelings and can love and respect women without sex?

No need to remind me it’s a television show – and an excessively dramatic one that both satirises and celebrates the telenovela format. I hear people sometimes don’t have sex in real life, too.

This starts with dating, though, not sex.

Dating is hard work. Dating takes a significant amount of time, money, and emotional energy. I didn’t realise this when I first started participating. I met my (now ex-) husband when I was only 19, so when I left him five years later, baby son in my arms, I naively expected that I might have a bit of fun being single, and then settle into another long-term relationship without much ado.

That was nearly seven years ago. I’ve fallen in love five times since then, and apart from a year-long live-in relationship, those relationships lasted from a mere one to six months long. While there was love, there was no commitment.

Three of those loves lived in different cities to me. After three, it was obvious there was a pattern, and that pattern sucked. I vowed not to get involved in a long-distance thing again, no matter how much I liked the person or how often we visited each other.

I didn’t. The next man I fell for was local, and I learned that long-distance breakups are way easier to recover from, when you’re not anxious about bumping into them on the street, and the physical distance means the emotional distance – the unreachability – makes more sense.

And the number of people I’ve dated and not fallen in love with? I couldn’t possibly name or even number them. I am a pro at dating.

Here are some of the stupid things I’ve learned:

If you want to have sex, meet in the evening and drink alcohol. If you don’t, meet during the day and drink coffee. Do not arrange a meal during a first date, you don’t want to get stuck. Have a plan immediately after in case you need to escape awkward conversation. Don’t set that escape plan in stone in case the date goes well and you want to carry on. Don’t text too much. Make sure you listen to him and don’t be emotional, and be flirty but not slutty and did I mention don’t be emotional for goodness’ sake be casual. Don’t mention the L word or the R word or the C word. (Love, relationship, commitment.) Be funny and charming and have quirks but not flaws and don’t have expectations or boundaries because you might come across as clingy or needy or demanding and the absolute last thing a man wants is to have to deal with a woman’s emotions. Dating in this millenium is an emotion-free zone.

I’ve tried various ‘dating strategies’ over the years, and none of them have got me where I want to be: not single anymore.

I confused promiscuity with empowerment.

I used to think I was fat and ugly, and I used sex to try and prove to myself that I wasn’t. I found out that plenty of men are eager for my body and that it doesn’t really mean anything.

Sex should be used to deepen and strengthen a relationship if a relationship is what you want. Not as a substitute for love or to force a relationship into existence. I was easily able to separate lust and love; but I wasn’t satisfied by the separation.

I deleted my dating apps after another pattern emerged.

This most recent pattern went like this: I would meet a man and he would be all in, very quickly. He would sweet-talk me, hint at future plans, and give me the attention and affection I craved. There would be a spark, and tingly feelings, and interesting conversations. Then he would leave, abruptly.

Three times this happened, and each time I was left either heartbroken or confused or angry (or all of the above), wondering what signs I should have picked up on, and what I was doing to attract and be attracted to this sort of person.

A friend said my ‘sexy radar’ was set to ‘depressed manchild.’

Recently I received a message from a man who I had apparently had a conversation with on a dating app about a year ago. I didn’t remember him, but he was interesting, so I was happy to talk. I am eternally curious about people.

I was upfront that I wasn’t actively dating, and I was consciously abstaining from sex, but despite saying ‘that makes sense, I respect that,’ he didn’t respect it. He kept steering the conversation towards his sexual fantasies. I almost felt myself being pulled back in to old habits, but I told him I didn’t want to be a fantasy, I wanted to be real.

It’s about being seen, I said to him. Fantasies are projected onto someone – especially in this situation where we hadn’t even met in person.

In these fantasies, I could be anyone. It’s not me who matters, I was just the repository for his ideas and desires. They could be projected onto someone else and it wouldn’t make any difference. In the past I might have played along because I liked the attention, or because I was into the idea too, but then I’d often get hurt when men realised I have needs too and I’m not just a fantasy.

What I really want is to be seen and cared for because of who I am, not what I represent or the empathy-service I provide.

I said he was trying to lead me down a path I no longer wanted to travel, and I wasn’t going to meet him. He said he still wanted to talk to me, because ‘it was a load off off my chest to talk about my rubbish fantasies.’

He didn’t want to talk because of anything to do with me-as-a-person. I was simply a non-judgemental stranger who he could offload onto. I have better things to spend my time on than being a free online counsellor.

I no longer feel I should behave in certain ways just because someone else wants me to.

And I meant it. Saying no felt more powerful and liberated than saying yes ever did.

When I was a teenager, half a lifetime ago, I was obsessed with Greek mythology, and particularly the Greek goddesses. I aspired to Hera’s orientation to family, Hestia’s domesticity, Athena’s power and badassery, Artemis’ mystery and independence, and Aphrodite’s allure and beauty. (I didn’t aspire to be anything like Persephone, insipid fool that she was.)

Nerd that I am, the societal value of beauty = worth became most visible to me through ancient goddesses.

I have a friend who is also a single mother and also disillusioned with dating and sex. Today she sent me a screenshot of a conversation with a stranger who messaged her on Instagram to tell her she was hot and that he’d date her if they were in the same country. He’s right, you’re a babe, I said. But that’s creepy. We don’t need male validation anymore, remember?

If she hadn’t replied, he wouldn’t have given her a second thought. If he wanted to get to know her, he could have asked about some of the many interesting things she puts up on her Instagram. You’re a high-value person, I reminded her. “Legit he just brought up sex,” she said, “damn I still get sucked in by simple attention.”

So now, after seven years of being in and out of the ‘dating scene,’ I’m choosing to focus my attention on my study, my kid, and my friends. I already feel more stable mentally and emotionally. My opinion of myself is no longer buffeted by men who may or may not care about me.

I’m not withholding sex as a punishment, because there is no one to punish. Not even myself – there is no self-sacrifice or shame involved in my abstinence. Unlike Jane Villanueva I am unconcerned about religious notions of purity. It’s simply that I am no longer prioritising other people’s desires or expectations over my own.

Giving up dating doesn’t mean I’ve given up hope of having a committed, loving relationship. It doesn’t mean I’ll put up barriers if something real and lovely happens. The opposite is true – I have more hope now than I had in the past. It’s hard to get what you want when you’re afraid to ask for it, or think you don’t deserve it.

I now feel strong enough not to sacrifice my needs for the crumbs of someone else’s attention. While I don’t regret past liaisons and see them as valuable experiences in learning more about myself, I now feel more empowered by celibacy than by sex.

Like Jane, I have novels to write, and a son who is more important than anything else. So far I have gained far more than I’ve given up: more time, and a stronger sense of self.