When I first bought my bus and started planning to build it into a tiny home, I envisioned a few months of working on it. Maybe six. Nine at the most. The timeline was based solely on how long I wanted it to take. I didn’t have a budget up front, because, well, I didn’t have money up front to make a budget with. It would take as long as it took, with whatever money I had spare. I went into this project with the will, hoping to find the way.

It’s already been three months, and I’ve only just started building. Ripping out the existing furniture, kitchen, curtains, ceiling, and floors took much longer than I expected. Me: hopeful and enthusiastic. Reality: time-consuming and expensive.

I wasn’t so naive to think there wouldn’t be delays and obstacles along the way. But I was eager. Then came the Asbestos Pause, which was probably the first of many obstacles.

In the past, I have been inclined to do a ‘good enough’ job on most things. I have average skills in many things, and that’s fine by me. I’m not a perfectionist. But when it came to the bus, I thought: this is going to be our home. I need to know it inside out, and retrofit it to a high standard. Because if it’s not functional, or it’s uncomfortable or ugly, we’re not going to want to live in it, and the whole thing will be a waste of time and money.

During the Asbestos Pause, I regretted that thoroughness. I wish I’d just done my usual ‘good enough’ and slapped a new layer of plywood on top of the ugly vinyl floor and gone from there. I would have been about 6 weeks ahead with the build, and it would have cost less. But I was trying to do a Good Job for once.

The first layer of vinyl was ripped up by a friend, because that friend has way more muscles than me, and it wasn’t a job that would be helped with a power tool. It just needed someone strong to tear it up. The second layer of vinyl, I started ripping up myself. I’ve already gained a bit more muscle working on this project, which is a bonus. When I got to the glue stained ply underneath, I took a photo of the manky floor and posted it on Facebook. It must be amazing to be my friend on Facebook with content like that.

More than one person alerted me to the possibility of asbestos in the vinyl adhesive from that photo, and I freaked out.

If there was asbestos my son had been exposed. He wasn’t working on the bus, but he’d been in it. My friend who ripped up the first layer of vinyl may have also been exposed. I know that minimal exposure means minimal risk; the danger lies in repeated exposure. But I felt terrible, and for the first time I wondered if it was a foolish plan for someone as inexperienced as me to take on a project like this. As well as the health risks, it could cost heaps to get it professionally taken out.

The need for autonomy, for a place to call our own, has become paramount for me this year. Even if that place is a bus. I want that for everyone. Not a bus: a place to call their own. Instead of just complaining about the woes of renting, I wanted to take action, even though my options are limited. So I bought a bus, and possibly exposed my son’s young lungs to asbestos.

It was a low moment. I questioned myself, questioned this wild plan of giving up a rental house, imperfect as the situation is, to live in a bus.

It was the first time I cried about the bus.

I shut up shop and sent a sample away for testing. The Asbestos Pause lasted for a couple of weeks, and I fretted the whole time. When the results came back – no asbestos detected –  the relief was so intense that I cried for the second time.

I finished ripping up the vinyl, which was a challenge, as there were thin bits of metal embedded throughout the vinyl and then nailed into the floor. But I got it off. I didn’t rip up the ply underneath it. Good Enough is in vogue again.

A couple of friends came round and helped me use an angle grinder to get rid of the useless old ambulance cabinet that ran the entire length of the bus. Slicing into metal with a metal disk rotating at high speed while sparks fly everywhere is terrifying. But we got it out, and chopped it into pieces so it would fit into my car to take to the dump.

Finally, the bus was empty of all the things I didn’t want. Finally, I can start building it back up into something I do want. It’s taken a long time, but I have a subfloor now. I used the table saw by myself to cut the pieces of ply, and I wasn’t even afraid. 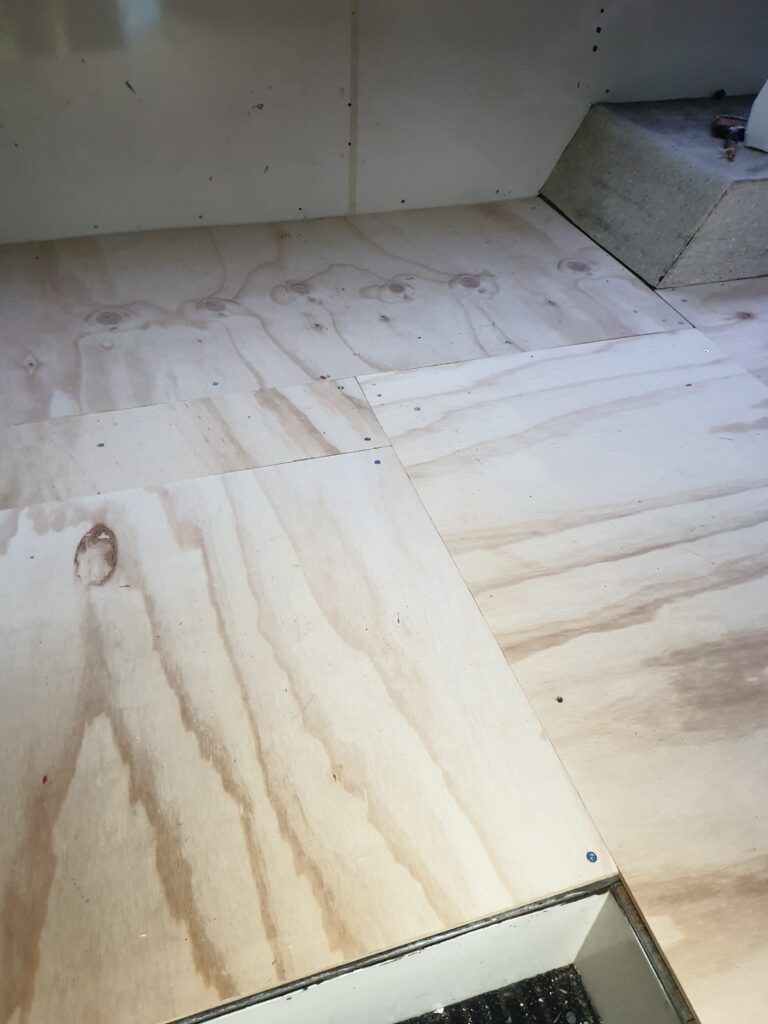